Why Do Dogs Lick Other Dogs’ Faces

In this article, we’ll take a look at: HIDE SHOW

As a dog owner or at least a dog lover, you may have already noticed that dogs show different types of behaviors, some of which we do find a bit weird. Dogs are loving creatures, inquisitive about all things happening in their surroundings. Through body language and vocalization they manage to express their emotions and feelings such as love, affection, fear, anger, anxiety, and playfulness.

Licking is a common feature in dogs, that may be caused by behavioral factors or health conditions. Dogs tend to sniff, nose-nudge, lick, and mouth many objects on a daily basis, in order to explore them. However, sometimes dogs are likely to lick not only objects but their owners and other dogs as well.

If you are curious about the reasons why dogs may lick other dogs’ faces, you may want to keep reading.

Dogs Lick Other Dogs’ Faces-Origin of This Behavior

Dogs as pack animals had to constantly interact with each other in order to notify the other pack members where prey was located or if there was danger nearby. They also had to express respect to the alpha of the group and show their bond to each other in order to survive and keep the piece in the pack. Some people may find dogs unfriendly and confrontational, however, in most cases, they try to prevent conflicts through different kinds of interactions.

Luckily when a dog licks another dog’s face, this behavior is considered behavior-related and is not a sign of an underlying health condition. 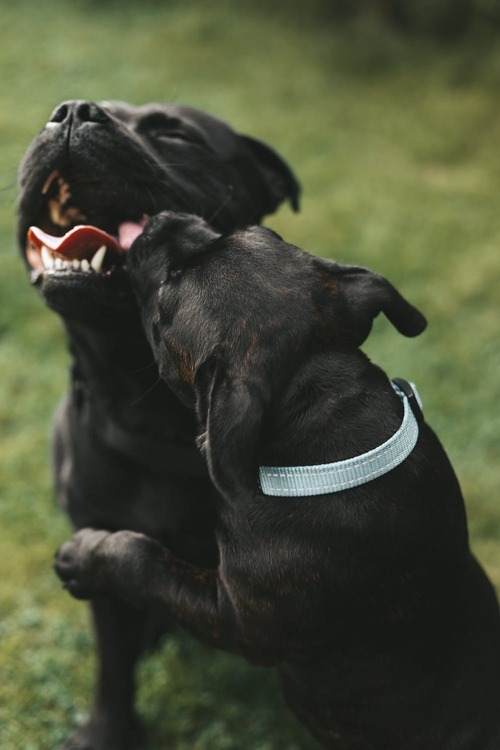 Why Do Pups Lick Older Dogs

This behavior can also be traced back to the dog’s origin from wolves and their pack instinct. After they returned from hunting, female dogs were licked by their pups. This caused them to vomit the predigested food in the puppies’ mouths and feed them that way. This “procedure” may sound really disgusting, however, it was really useful, as it increased puppies’ chances to survive.

Mothers tend to lick their pups. If you raise a female dog and a pup/puppies of her offspring, you are likely to notice that the mother enjoys licking her pups. Even after the pup enters adulthood, this type of behavior may remain constant. Most puppies really enjoy their mothers’ attention.

We can divide this behavior into three categories. The first category is:

Since dogs got used to licking the alpha of the pack or the more dominant pack members to show their respect towards them, licking as a sign of respect and appreciation can be noticed nowadays as well. Whether licking a familiar dog, or an unknown dog, this behavior expresses a form of submission. This is especially noticeable when the dog showing submissive behavior approaches the other dog under the chin. If the other dog licks the first dog back, this means that he/she accepts the submission.

Dogs Express Their Love and Affection

Canines tend to lick their owners’ faces or other dogs’ faces, to show their love and strong bond. The process of licking, similar to kissing and hugging by humans, releases endorphins, that make both sides feel more relaxed and happier. Since strong bonding was crucial for the dog’s survival in the past, licking was used as a bonding tool. Due to the strong survival-related meaning of this behavior, it remains today.

Most of you already know that dogs take a specific body posture to show that they are ready to play-the play bow. This posture means that the front legs of the dog are stretched out in front, the chest is close to the ground, and it looks like the dog is about to lie down, but the back area of the body is raised high. Also, dogs are likely to hold their tails and ears high and expose their tongues as additional signs of their desire to play. 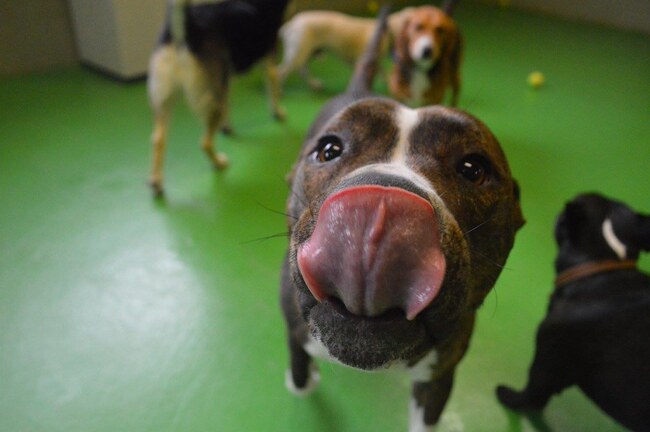 When You Should Stop This Type of Behavior

In general, we can say that licking is a form of body language showing that a dog will not harm. As you already learned from the points above, licking shows respect, appreciation or eagerness to play. However, there are certain cases, when licking other dogs’ faces should be stopped.

If you notice that the licked dog does not enjoy being licked and expresses his/her irritation through growling or showing his/her teeth, this may be considered a warning sign. If the licking dog is constantly disturbing the other dog and even chasing him/her, in case he/she runs away, this behavior should be stopped.

Dogs usually calm down in a while, after they have expressed their emotions and have spent an excessive amount of energy. If the time frames, when the dog performs this behavior, get more and longer, and your pup does not seem to get calm soon, you may need to take action.

Dogs should not lick injured areas of other’s dog bodies, especially if there is an open wound. This may contaminate the wound or remove any treatments applied to the affected area. Moreover, you should not let a dog lick any remedies from another dog’s face or body, as they may end up in his/her digestive system.

If you raise two dogs who have a strong bond, they may lick each other’s faces quite often to show their affection. Nothing bad, right? However, sometimes two dogs develop so strong a bond to each other (or a dog to his/her owner), that they may develop separation anxiety. If this is the case, you should not let things keep going that way.

Licking May Turn Into an Obsessive Habit

If you notice that licking gets more and more intense and frequent, and your dog finds it difficult to get rid of this habit, it may already have turned into an obsession. Over-licking may even damage the body or face areas where it was applied to. Obsessive licking can be aimed at other dogs or at the dog’s own body. In both cases, it can increase the sensitivity of those areas and lead to wounds.

What to Do If Licking Becomes Obsessive?

We highly recommend that you should not try using force or yelling at your dog to stop. This will be not only ineffective, but it could worsen the problem. You could use treats and toys as positive reinforcement tools for behavioral management instead. Try to redirect your dog’s attention, by gently calling his/her name and giving them a simple command to fulfill like “sit”. Then reward them immediately.

If the dog can not stop licking his/her own body, you may need to put a cone on him. We would recommend that you resolve any behavioral issues through training and constant encouragement. However, in some cases (like when there is an open wound), more cardinal measures need to be taken.

If you have two dogs and one of them is too attached to the other one, you may need to conduct training, to prevent the development of separation anxiety. You could put the food and water bowls of both dogs in different areas in your home, and engage them in interactive games, that they will have fun with even being separated. If one of the dogs starts whining anytime the other dog goes out of the room, you may need more serious training. Start with small steps and keep the two dogs separated for a few seconds at the beginning. Reward the dogs if they remain calm and do not whine during this time. Gradually increase the time duration and give them rewards when they behave properly. If the problem is too severe, and you can not handle it yourself, you may need to consult a dog trainer or a behaviorist.

Can You Raise a Service Dog?

Are Your Dog’s Lick Kisses Showing Love to You?

Are Your Dog’s Lick Kisses Showing Love to...

Should I Get a Dog? 6 Must-Known Things

My Dog Is Panting and Shaking — What...

Why Dogs Seizure While Sleeping

Dog’s Shaking – Reasons and How to Handle...

How To Calm A Dog

Why Does Your Dog Pee on Your Bed...